We had both agreed that we would not do it again.

But we both knew that we were lying.

After dinner, when he lingered at my table, I offered to give him a massage to help with the back pain he was having.  We pretended that it was only that, a simple, innocent massage.  As I am a professional massage therapist and so is he.

We set up the purple massage table in my bedroom in feigned earnestness.

He took off his shirt, exposing the bare tanned skin of his chest to me.  He lay down on the table, and I covered him with a sheet.  I put on my favorite relaxation album, and willowy, golden music filled the air.

I planted my feet by the side of the massage table and reached for him.  I was craving to touch his skin, to inhale his familiar scent.

Working over the thin cotton sheet, like I do at the start of every treatment, I pressed my hands firmly onto the muscles of his back and then pushed a hard fist into his glutes on each side.

His voice deliberately mild, he suggested that maybe it would be easier on my hands if he took off his jeans.  I stepped politely outside the room and when I returned he was completely naked beneath the sheet.  I could not help but be very aware of his nakedness.  The unspoken tension between our two bodies lay thick in the air, a sensual cloud.

I undraped the top of the sheet from his back and poured almond oil into my hands.

The first touch of my well oiled hands gliding across his dark shoulders sent a wave of emotion through me.  How good it felt, my hands on his warm skin again, how right.  It was like our bodies were resuming a deep conversation after a period of silence.

It had been a month at least since our last intimate encounter.

The strokes of my fingers upon his skin were slow, smooth, impossibly soothing.  As my fingers danced in small circles across the sides of his spinal column, I could intuitively sense how sore his muscles were.  I pressed gently into the taut fibers, loosening the knots of the adhesions. He started to breathe deeper, releasing little grunts and moans as he exhaled.

I breathed in the sensuality of listening to his audible breath.  The very sounds made me throb with desire.

I worked along the expanse of his back, unwinding the tight ropes of his muscles with long deep strokes, then covered it up again.  Moving downwards, I undraped his right leg and the right side of his butt, chastely tucking the sheet at the cleft.  I rubbed oil onto his exposed buttcheek and ran my fist over it, in a downward motion from his sacrum toward his hips, watched the bounce of the flesh of his ass.  I knew how good this must feel to him, how exquisitely sensitive he was there, in this private place.   This was the same routine that I used on many of my clients but normally I was not so aroused like I was now.  I was flushed, wet between my thighs.   I was sweating.  All I could think of was the extravagant pleasures we had shared so many times before.  I knew he must be thinking the same.

I imagined his thoughts, his inevitable excitement and maybe slight uncertainty.  He was waiting to see what I would do.  Not saying anything, just lying there, face down, eyes closed.  Like a coiled snake, waiting to strike.  Anticipating.

I redraped his butt with the sheet and left his leg exposed.  I traced the length of his leg from foot to upper thigh with oil, massaging around the breadth of the muscles with the fans of my hands.

I saw him ever so slightly squirm as my nimble hands made their way across the top of his thigh and suggestively brushed up against the roundness of his ass beneath the sheet.  I applied more oil and massaged his upper leg.  Then, lead by the decadent whim of my desire, I worked my fingers more deeply into the hidden erogenous zone between his thighs, something I would never do in a professional massage.

I watched as he began to pump his hips subtly back and forth, the hardness of his erection obviously pressing up against the table.

We had both known we would do it again.

Without a word, I climbed stealthily onto the table and pulled away the sheet to reveal his nakedness.

I slid off my dress, so I was down to my bra and panties, and straddled his ass, pressing my breasts against the backs of his thighs, my hard nipples rubbing against him.  I continued to slowly explore with my fingers the nooks and crevices of his inner thighs — teasing and kneading, stroking tantalizingly close to his sensitive balls but not quite touching them.

I could hear him breathing hard.  With care, I parted the cheeks of his ass, pressed them open with my hands, bent over, found the tight little indent of his asshole with my tongue, and began to lick.

Deep and wet was my tongue.  A long groan escaped his lips.

He reached behind him, grasped my neck with his hand and pushed, burying my face deeper into his ass.  I licked and spit, bit and tongued his asshole and the plump flesh of his buttcheeks while I gripped his hips.

He was writhing.  Unable to bear his building arousal anymore, he tucked his hard cock back between his legs and fed the head into my mouth.

I licked and sucked the sensitive tip, ran my tongue around the shaft, as far as it could reach.  My spit dripped from my mouth down the sides of his cock.  My tongue fluttered and rolled over his balls, leaving its wet, messy trace.

I was becoming undone.

His cock felt good in my mouth, but I longed to have him inside me.  I was aching for him.  All I wanted was to spread my legs and feel him penetrate me.  It was an urgent need, almost painful.

I pulled away and he turned over, his eyes sparked with arousal.

I climbed on top of him.

He knew exactly what I wanted.  He knew me.

He spanked my ass with a smirk and we grinned at each other, both delighting in the rich sound.

“Break me open” I whispered.

I was lounging in sheer black lingerie and black velour heels

the last time you walked into my bedroom.

as stealth as a fighter pilot,

planted your face between my thighs,

and carpet bombed my panties with little kisses,

like a dark flower on the surface of the thin lace,

You pushed my panties aside and attacked my pussy with your tongue,

lapping at the folds of my clitoris,

making me cry out

for you to enter me.

And so you did.

I got on my knees

and you grasped the spikes of my heels in your hands

and slowly slid inside me from behind,

as a grunt-like sigh of ecstatic relief escaped from your lips,

the universal relief that men feel

when they return for a moment

to the womb of Woman’s embrace.

I twisted around to kiss your mouth,

but you playfully withheld,

and I begged for it, puckering and opening wide and pleading with my eyes.

You stared back at me, unyielding,

then spit hot and wet into my mouth

for me to swallow.

with the hard and calculated mercy of a man,

I know I am surprising sometimes,

in how I feel tonight,

rubbing between my thighs,

I am the bees in springtime,

From the fertile center

for a pagan goddess,

was a special kind of worship.

who has the key 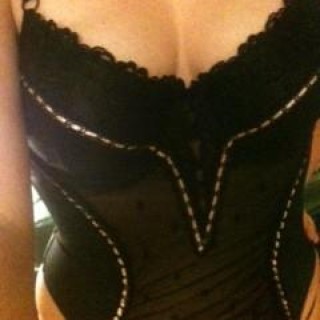